Eldercare » Eldercare Home Health News » You’ve probably seen the ROM dinosaurs since you were a kid…
But I bet you’ve never seen anything like the Chihuly glass exhibit! 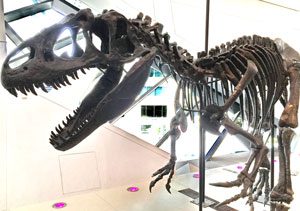 Dinosaur skeleton at the ROM

You’ll be thrilled and probably have enough energy left to see at least half the ROM dinosaurs and maybe even the Tattoo exhibit too.

Dale Chihuly, an American sculptor, has mastered the alluring, translucent and transparent qualities of ice, water, glass and neon.

The sculpture below, Float Boat, was inspired by the fishermen’s floats he saw as a child. The boat is full size. So those glass balls are immense! 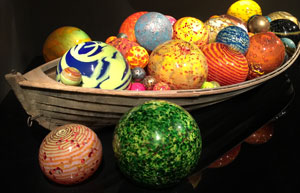 Chihuly float boat at the ROM

Chihuly’s spectacular exhibit at the ROM invites you to share his own awe of what sand, fire, and human breath can create. These brilliantly coloured works of art produce a magical, sensory experience that I will never forget.

And bring your camera, because to my wife’s surprise and mine, you’re greeted by a sign that invites you take photographs! The Chihuly exhibit is on until January 2, 2017. 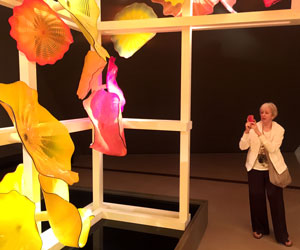 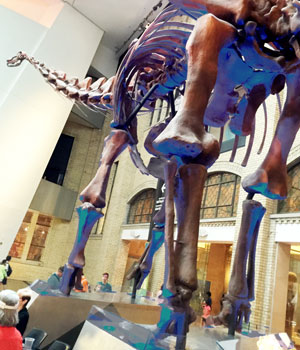 Dinosaur at the ROM

The Royal Ontario Museum – the ROM, is the largest museum of art, culture and natural history in Canada. Its collection of dinosaurs, other archeological material, art and culture draws over a million visitors a year.

Bring your grandchildren, and those old bones will speak to them as they do their own archeological dig. 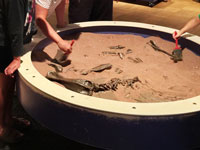 Digging at the ROM

There’s even an extinct deer skeleton called “The Subway Deer,” because it was discovered during the dig for one of the Bloor Subway’s stations. So far, nobody has found another deer like it anywhere.

The collection is themed and arranged in ways that poke even an old guy like me to wonder about our origins. 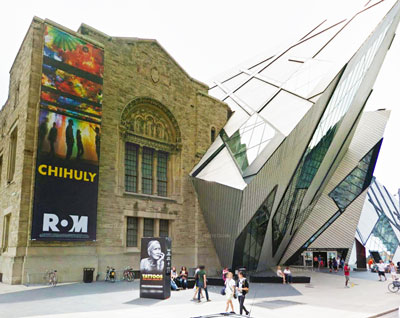 The Michael Lee Chin Crystal – the ROM, is one of the most recognizable buildings in Toronto

The ROM is at 100 Queen’s Park in Toronto. But you’ll think of it as the southwest corner of Bloor and University Avenue. The entrance is on Bloor.

The ROM sits atop the Yonge-University and the Bloor -Danforth subway lines.

I’d suggest you avoid street parking if you’re driving. It’s hard to find and may limit your visit. There’s a Green P parking lot with its entrance on Bedford Road just north of Bloor. (Varsity Stadium is opposite the intersection of Bedford and Bloor.)

Perfect for seniors – a number of ROM discount deals

Save up to 43% off ROM admission plus four more attractions with CityPASS.

Senior Family Two admits the two card-holding senior members and up to four youngsters under age 17 to everything at the ROM – with unlimited free general admission and admission to specially ticketed exhibits! Plus a number of other valuable discounts and benefits. A great deal: just $145 for a full year

The ROM is open every day except December 25th.

The ROM is committed to accessibility for all visitors.

When you want to take a break and chow down, enjoy Druxy’s ROM Cafe.

It’s actually terrific! Druxy’s is probably the best-organized museum cafe I’ve ever been in. There’s an ample selection of good food, from the hot meat sandwiches you’d expect to salads, pizzas, simple sandwiches and daily specials. Prices are reasonable.

Check out the ROM boutique

The Boutique in the ROM is open:

The Chihuly Exhibition Store (Level 2B) is open:

The online store will give you a better sense of the delights that away you than I can here.

I was particularly captivated by a men’s short-sleeve shirt with a dinosaur pattern all over it. I resisted the temptation, but I really, really like it.

Dinosaurs, Chihuly glass, tattoos and so much more. (Did I mention the Bat Cave?) Revisit the ROM soon.

PS: You may want to take a sweater; the air conditioning is really effective!