Eldercare » Eldercare Home Health News » Frozen vegetables and fruit can be more nutritious than fresh!
That says nothing about appearance, flavour or texture. But if nutrition is the game, frozen fruit and vegetables - even canned ones - can be a better choice. 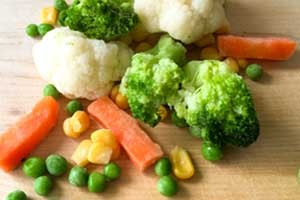 Plucking and eating vegetables and fruit at their peak is just about the only way to beat the nutritional value of fresh-frozen or canned fruits.

It sometimes takes up to two weeks for fresh produce to get from farm to table. In that time, 10 to 50 per cent of the more unstable nutrients can disappear. So says “Ask Alice,” Columbia University’s team of health promotion specialists, health care providers and other health professionals and information and research specialists.

Then there’s more sitting around on your counter for in your fridge. Not good for nutrients.

Frozen fruit and vegetables, on the other hand, or canned, for that matter, are often processed in the field or very close by, using fully ripened produce at the peak of its nutritional value and flavor.

Freezing or canning does cause some nutritional loss, but the amount depends on several things. Flash freezing is sometimes preceded by blanching or peeling, so a tiny amount of nutrition may be lost. But fruits aren’t blanched before freezing and the loss in vegetables depends on what’s being blanched. The heat in canning causes a little more loss. But the fruits and vegetables start out with more nutrients in them than any but just-picked, fully ripened produce.

Frozen fruit or vegetables have no waste

No bruised and battered bits, no wilted or “rusty” leaves – and they don’t sit around to suddenly become overripe. Generally, what you take out of the frozen fruits or vegetables package or the can is just the amount you need, just when you need it. You might have one serving left over, but that will hold well in your refrigerator.

With some foods, canned is best 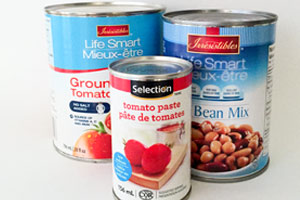 Surprise! The heat used in canning tomatoes brings out their lycopene – a carotenoid that some believe helps us resist prostate, lung and stomach cancers. An article in the British newspaper The Guardian holds even more promise of powerful nutritional advantage in canned tomatoes. (Oh – it’s British. They call them “tinned” tomatoes.)

And believe it or not, canned sardines deliver more calcium to you than fresh ones would. That’s because canning softens the bones, which most of us just eat. There’s calcium packed in those bones. There’s also more omega-3 fatty acid in canned fish packed in oil than fish packed in water. Canned fish likely contains less mercury than fresh fish, because canners use smaller fish. And canned fish is more likely to be wild than farmed.

Watch out for added salt and sugars

Most canned foods use added salt as a flavor ingredient and preservative. Some frozen foods do. Frozen meats, whether precooked or not, probably have some seasoning. Frozen fruit may have a variety of sugars added, not just plain old “sugar.” Watch out for sucrose and glucose or other forms of sugar.

Frozen fruit and vegetables – and canned ones – may contain less pesticide.

Food manufacturers thoroughly wash their produce in tumblers and also blanch and peel some before freezing them. Mother Jones sources Dr. Carl K. Winter, a food scientist at University of California-Davis’ Cooperative Extension, on the subject. He says that processed fruits and vegetables generally have less pesticide residue than fresh conventional produce. Of course, all fresh fruits and vegetables should be scrubbed in running water before use.

The Canadian and American governments conduct regular surveys of all the research related to bisphenol A in canned food linings.

The USFDA (United States Food and Drug Administration) did its last study in June, 2014. It came to the same conclusion as Health Canada’s last study: “… the available information continues to support the safety of BPA for the currently approved uses in food containers and packaging.”

Frozen fruit, vegetables, fish, meats – they all spell convenience and nutrition as good or better than fresh.

Enjoy lots and lots of them. Canada’s Food Guide recommends that adults over the age of 51 have seven servings of fruit and vegetables per day. So what’s in a serving? 1/2 cup of fresh, frozen or canned vegetables or fruit; 1 cup of leafy raw vegetables or salad; a piece of fruit.

It’s easy (And enjoyable!) to meet your daily requirements if you spread them over three meals a day and a few snacks.

However you enjoy your fruits and vegetables, enjoy them often.