Eldercare » Eldercare Home Health News » Small museums within an hour’s drive of Toronto – easy for seniors to visit
On a fine day, my wife and I often jump in the car and tour around nearby Ontario. With our favorite programs on the radio, we need only the smallest excuse to spend a pleasant couple of hours to and from a small town or two or a nearby small museum. We’ve toured a few of these small museums near Toronto, they're easy for seniors to visit. The others are on our list. See you there? 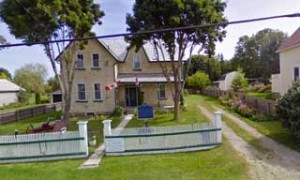 Not only can you visit the Manse in which the author of Anne of Green Gables lived with her husband, the minister of St. Paul’s Presbyterian Church, you can enjoy a five-course luncheon tea during the summer months.

Maude lived in Leaksdale, a small farming town a little north of Uxbridge. Simply take Highway 404 to Newmarket, head east on Davis Drive and follow the map in the link in the previous sentence. It will take about an hour and a half.

The Children of Peace founded the Temple in the 1820s. These former Quakers completed the Temple in 1832. It was restored in 2011and is now part of the Sharon National Historic Site, which encompasses nine historic buildings in a park-like setting.

Do not miss the unique round outhouse!

The Sharon Temple is north of Newmarket on Leslie Street in East Gwillimbury – about an hour from Toronto. Be sure to check out the coming events in the website; there’ll be a five-hour Canada Day Community Celebration, for example. 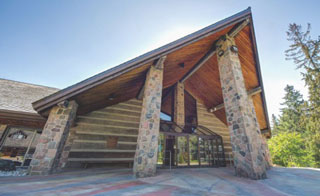 Canadian art…nothing but Canadian art…all kinds of Canadian art, from the Group of Seven to aboriginal art to current work in any medium, from photography to sculpture. The McMichael Canadian Art Collection has over 6,000 works in its collection – and a beautiful sylvan landscape that surrounds them.

For seniors 65 or over, admission is $15.00. But there’s a worthwhile Family Package that could make the McMichael a memorable day out for grandparents and grandkids.

The Collection is wheelchair-accessible. The car trip from Toronto City Hall to the Collection on Islington AVenue in Kleinburg should take about 45 minutes to an hour. Clear signs identify the home of the Collection.

Close to an hour’s drive from Toronto can immerse you in one of Canada’s strongest heritages – our importance in the world of wartime aviation. The Canadian Warplane Heritage Museum houses 40 aircraft from the past to the present – and provides flights in several of them with a membership and upgrade.

The aircraft that were part of the British Commonwealth Air Training Plan during World War II are at the Canadian Warplane Heritage Museum. These are the planes that put over 131,000 young men from Canada, Australia, New Zealand, Australia and the UK into cockpits and other flight crew positions in the largest aviation training program in history.

The Museum also houses one of only two Lancaster bombers in the world that are still flying.

Be sure to check out the Upcoming Events in the website.

The Canadian Warplane Heritage Museum is located at the Hamilton International Airport. The grounds are wheelchair-accessible. 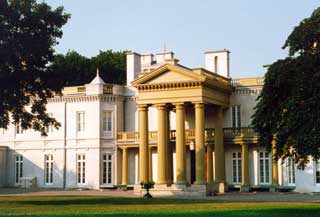 Dundurn Castle, Photo courtesy of The City of Hamilton, Tourism and Culture Division

Dundurn Castle, with 40 rooms on three floors, is partially wheelchair-accessible. To drive to its site at 610 York Boulevard in Hamilton, take Highway 403 towards the city and exit at York Boulevard. Admission is $9.50 for seniors 60+,

Sir Alan MacNab built Dundurn Castle over three years on the location of a War of 1812 British military post. It’s currently restored to what must have been its peak – the year 1855, when Sir MacNab was, as the website says, at the height of his career as a lawyer, landowner, railway magnate and Premier of the United Canadas (1854-56).

My wife and I have toured Dundurn Castle. We thoroughly enjoyed the kitchen, the lavish furnishings and the fully functional kitchen garden.

Be sure to take the Virtual Tour online. 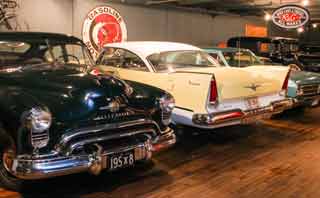 This is the only museum dedicated to Canada’s automotive history.

Of its 92 vehicles – all donated – most are on display, with Canadian vehicles from 1903 to the present, American and British cars and European racers and luxury cars. There also are trucks and motorcycles.

Admission – cash only – is $4.50 for seniors. The site is wheelchair-accessible. There are several lunch spots within walking distance in downtown Oshawa.

To drive there, take Highway 401 East and exit at Simcoe Street North. Turn left turn from the Simcoe Street stop sign into the left turn lane. Turn left at lights, continue over the highway, and head north 1.7 km on Simcoe St. The museum is on the right, across from Memorial Park, past the stoplight at John St.

This is time travel!

The South Simcoe Railway Heritage Corporation runs excursions from Tottenham to Beaton and back in snorting, fuming steam trains. The engine may be Canadian Pacific Railway Engine No. 136, built in 1886, or a relatively modern diesel. The vintage passenger coaches will give you a wind-in-the-face experience of train travel before air conditioning. Smell the smells of the countryside as you roar by. Stick a hand out the window and feel the blast of wind. The return trip takes just under an hour.

The South Simcoe Railway station is in downtown Tottenham, 20 km west of Highway 400 on Highway 9 – about 50 minutes from Toronto.

I’ve taken part in a photo shoot there and I can tell you, it’s beyond charming.

I’ll be sitting down with my wife and planning a small-museum-outside-Toronto itinerary. The next few months will be stimulating and fun. Why not check out these small museums near Toronto easy for seniors to visit?