Eldercare » Eldercare Home Health News » Miracle cures, elixirs promising you a longer life and of course snake oil! A cure for whatever ails you…
Not that long ago anyone could whip up a “formula” - often with hazardous ingredients such as opium or cocaine - and call it a cure for just about anything. There were phoney tests, phoney success stories, phoney promises – phoney everything!

It’s hard to believe that, until the last 100 years or so, cures, liniments, nostrums and patent medicines were just about entirely unregulated.

This wonderful Clark Stanley’s Snake Oil ad doesn’t hold back. The claim – that this liniment (a medicinal preparation in an oily, soapy, or alcoholic vehicle, intended to be rubbed on the skin as a counterirritant or anodyne) would cure everything from rheumatism to a toothache, from frostbite to reptile bites. In short that it was good for “everything a liniment ought to be good for! And as if that wasn’t amazing enough, it was “good for man and beast!” 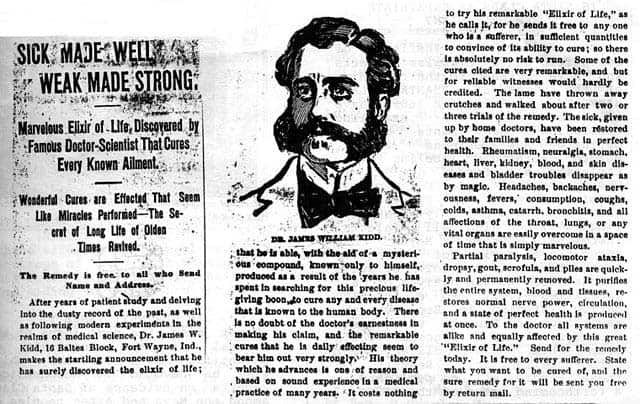 Inventor, Dr. James William Kidd’s ad states that his “marvellous Elixir of Life… cures every known ailment” and is “the secret of a long life of olden times revived”!

It is claimed that the “theory which he advances is one of reason and sound experience in a medical practice of many years”. That “the lame have thrown away crutches, that the sick given up by home doctors have been restored to their families in perfect health” and that “partial paralysis… is permanently removed”.

It goes on to say and that it purifies the entire system, blood and tissues…and a state of perfect health is produced at once”.

“It’s free to every sufferer. State what you want to be cured of, and the sure remedy for it will be sent to you free by return mail.”

Dr. Kidd’s ad was a little ambiguous; from what I can tell an initial sample of his Elixir of Life was free. After that, it’s not clear.

Claims that you’d live longer had little to do with empirical science.

In the waning days of the 17th century, there was a link between medical elixirs and the primitive medical science of the time. Certain herbal treatments and mineral drugs were seen to work in a limited range of diseases and infections. But soon, doctors began brewing their own blockbuster concoctions. They blended ingredients without any scientific basis and claimed to cure everything but ingrown toenails. There was little or no regulation of these claims. Here’s one of those beauties:

This doozy came to the world in 1673 courtesy of a Higher Authority.

Well, that’s what ad claims: “Health-bringing drink…found out by the Providence of the Almighty, and Experienced a Most Excellent Preservative of Man-kind…

Royalty was in the cures and elixirs game too.

Royalty in Great Britain and Europe awarded monopoly privileges with royal patents. They had honest and also perhaps greedy reasons for doing so. On the one hand, royal patents promoted the development of new industries and the discovery and exploration of new lands. On the other, it made some of the rulers’ court favourites rich. And who knows how much of that new wealth flowed back to the royal coffers?

Claptrap such as this is a criminal offence in Canada.

Nonsense such as Valentine Hassmer’s Lung & Cough Syrup doesn’t stand much of a chance today. Believe me, I know. I spent my working life writing ads. Copy for anything we promoted that was ingested or applied to the body, from foods to antacids and deodorants, went to our ad agency lawyer first, then to Health & Welfare Canada, then to the commercial acceptance department of the CBC if we were going advertise there. When it came to beer, the advertising went to the alcohol control people in the pertinent provinces too. Then – if the client approved – the ads ran.

By the way, check out the Directions for Use on the label: a wineglassful three times a day before meals and the patient may increase the number of doses per day at will! I wonder if there was any alcohol in there…

Electro-Germicide cures all diseases due to microbes, fungus growths, bacteria and disease germs 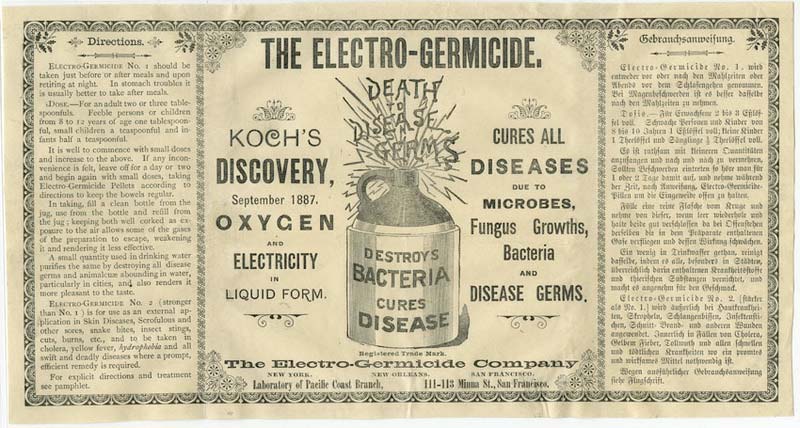 This beauty, as does Valentine Hassmer’s label above, comes from the California State Archives “California’s Old Series Trademarks” collection,.

The trademark application avoids any description of how this miraculous product is made. Exactly how you turn oxygen and electricity into a liquid combination seems to have escaped modern science. But it must have been reassuring to learn in the fine print that one should keep the liquid “well corked, as exposure to the air allows some of the gases of the preparation to escape, weakening it and rendering it less effective.”

For the curious among you, there is such a thing as medical liquid oxygen. There’s no electricity in it. It’s gaseous oxygen reduced to its liquid state by extreme cold (-183 Celsius) and kept that way in an insulated container. When it’s released, it returns to its gaseous state. One litre of liquid oxygen converts to 860 litres of gaseous oxygen. The advantage is obvious.

There’s nothing like getting the kids started on cocaine early.

This leads to the question, “Was there ever really cocaine in Coca-Cola?”

The question leads to a long answer, all of which you can learn in the Snopes fact-check website.

Snopes reminds us that Coca-Cola was developed by a couple of pharmacists as a patent medicine. It originally contained some cocaine in its early days, but cocaine was an accepted medicinal ingredient before its dangers were recognized. Very quickly, once the public and the government of the U.S.A. recognized the threat of cocaine addiction, the developers of Coca-Cola reduced the extract of the coca leaf in the syrup to a barely measurable amount. According to Snopes, you’d be lucky to get ssix-hundredths of an ounce of cocaine out of 25-odd million gallons Coca-Cola syrup by then. By1929, Coca-Cola was entirely cocaine-free.

Many once-dubious nostrums, cures and elixirs have become respectable products in our medicine chest today.

It took advances in medical science, the impact of good journalism, an increasingly aware public and responsible political decisions to cause the patent medicine industry to clean up its act.

Today, some of those early wonders, such as Bayer Aspirin, which always did work as an analgesic, are standard medicinal products any doctor would recommend.

Others simply cleaned up their claims, such as Lydia Pinkham’s Vegetable Compound. Once, this home-brewed (originally) herbal remedy made claims as outrageous as this: 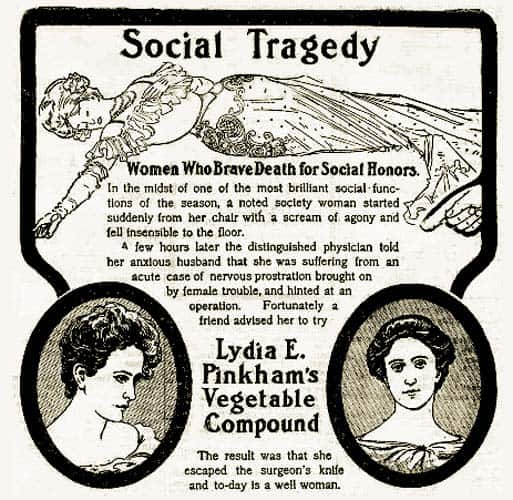 Note the closer in the ad: “Fortunately a friend advised her to try Lydia E. Pinkham’s Vegetable Compound. The result was that she escaped the surgeon’s knife and to-day is a well woman.”

Today, the product is marketed as Lydia Pinkham Herbal Liquid Supplement. It promises no more than to “help you feel better during menstruation and menopause.”

Sometimes, you have to look back to see how far you’ve come.

Most of us are confident that our government protects us when it comes to over-the-counter and prescription medicinal products. Certainly, prescription drugs are approved after scientifically sound tests for effectiveness and safety. Considering the thousands of drugs and the millions of people with unique bodies who use those drugs successfully, modern scientific medicine’s  treatments are to a great extent, something we can be proud of.

Pharmaceutical or natural, you can be pretty sure that no treatment today will promise long life and get away with it.

If you enjoyed this column, please comment on it. That might encourage us to write more about those crazy cures of the past.

One thought on “Miracle cures, elixirs promising you a longer life and of course snake oil! A cure for whatever ails you…”