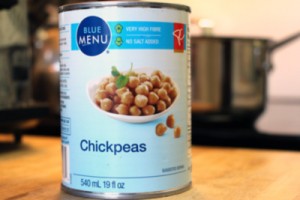 Low sodium foods are still not easy to find at the supermarket. I had congestive heart failure last August, so my wife and I have had to figure out where to look for low sodium foods. And we have learned that we don’t have to give up pleasure from our food to get the low sodium food we need. Yes, anyone with high blood pressure, heart or coronary disease or even diabetes has to be extremely careful about how much sodium they ingest. But it’s not the end of the world. Here’s how to make it easier:

1: Look for sodium content on the front of the label

Health Canada packaging rules are very specific about what food manufacturers can say on their product labels. , The regulations are more complex than these summaries. I’ve tried to reduce them to plain English – see below. Health Canada recommends that a healthy person shouldn’t consume more than 2,300 mg of sodium daily (that’s about one teaspoon). If you have heart problems or are diabetic, you’ve probably been advised to stick to a salt intake of around 1,500 mg.

No added sodium or salt means exactly that. No added salt. No other sodium  salts. No ingredients that contain sodium and functionally substitute for added salt.

Free of sodium or salt means the food may contain up to 5 mg of sodium per the stated serving size.

Low in sodium or salt on a label means the food may contain 140 mg or less of sodium depending on the serving size. There are other considerations in the actual regulations.

Reduced in sodium or salt: at least 25% less sodium than the similar food that isn’t sodium-reduced. But there’s more to it in the regulations.

Lower in sodium or salt tells you that there’s at least 25% less sodium per food group in a prepared meal. The actual regulation is more complicated.

Lightly salted requires the food to contain at least 50% less added sodium than the added sodium in a similar food that isn’t “lightly salted,” a food that also can’t be described as “low in sodium or salt.” Again, the regulations are more complicated.

Note: Just because a food is legally labelled “less sodium” or something similar, it doesn’t mean that it’s safe to use if you’re on a low sodium diet. Soy sauce with “less sodium,” for example, may contain 24% of your D.V. of sodium in 1 tbsp. You’re likely to use more than just that tablespoonful at a time. Balsamic vinegar makes a good alternative and contains no sodium.

2: Look for low sodium in the Nutrition Facts on the back label

There’s a wealth of helpful information on the Nutrition Facts part of a label. But be careful you don’t make one easy mistake. 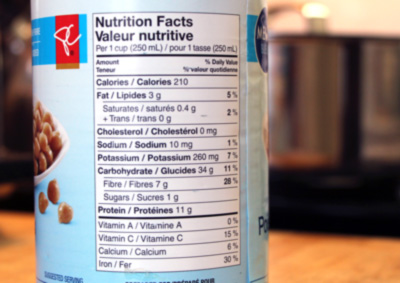 The sodium content is not a percentage of sodium in the entire package. It’s a percentage of your Daily Value (D.V.) in the serving size shown in the top left corner. Learn to control both aspects of what you eat or drink: the percentage of salt in a specified serving and the number of servings.

3: There’s often a lot of sodium where you least expect it

I’m not suggesting that foods such as Ace Bakery’s Bake Your Own Multigrain Petits Pains are bad for everybody. But if you’re on a low sodium diet, you have to be aware that they contain 12% of your Daily Value of sodium. 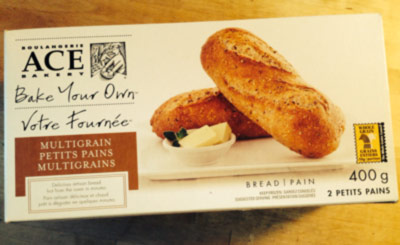 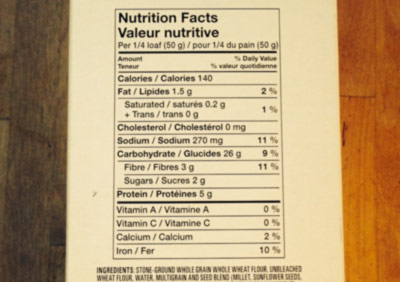 In fact, many breads contain that much salt and more. So either avoid them, or be very disciplined about how much of them you eat. On the other hand, you can look for reduced sodium breads such as Rudolph’s Bavarian Multigrain Bread. Each very large slice has only 6% of our D.V. of salt. I use half a slice with no-salt peanut butter at breakfast.

It’s just about impossible to eliminate added salt entirely from your diet. According to a dietician at my cardio rehab centre, any processed foods with 5% or less of your Daily Value of sodium in a serving is a reasonably good choice – if you enjoy it with a little restraint.

These PC Original Water Crackers from Loblaw’s are not salt-reduced. Or low sodium. But if you read the Nutrition Facts, you learn that there is only 4% of your Daily Value in a serving of 5 crackers. With a dab of natural peanut butter (no salt) on each, you’d have a good, healthful snack to go with a cup of coffee.

No question: Give up salt and you give up some flavour. But some food manufacturers are delivering really delicious low sodium products. I can’t tell that Heinz Low Sodium Ketchup (3% of your sodium D.V. per tablespoon) is any different from the original. There are several Bavarian style mustards that have little or no added salt, although they’re not labelled as such. Honeycup Stone Ground Prepared Mustard has only 1% sodium in 1 teaspoon. But be careful if you’re diabetic – there may be added sugar in some Bavarian-style mustards.

Loblaw’s PC Blue Label has a couple of interesting soups. 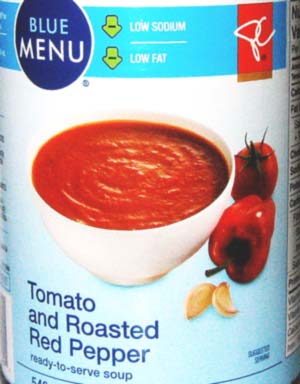 This one – Low Sodium Tomato and Roasted Red Pepper – has 140 mg or 6% of your Daily Value of sodium in 1 cup (compared to the “regular” version which has 600 mg of sodium). The red pepper adds sweetness and depth to the flavor. Toss in some chick peas (low sodium or rinsed to remove salt) or PC Blue Label Six Bean Medley (only 1% of your Daily Value of salt), perhaps some frozen greens, heat and you have the core of a satisfying light lunch with some protein in it. Here’s a good place to learn more about low sodium foods from President’s Choice.

6: Learn how to make trade-offs

Sometimes my wife and I crave a pizza. Pizza-shop pizza is far from a low sodium food. It’s loaded with salt in hidden places. Frozen pizzas can have an excess of sodium too – often lots more than 20% of your Daily Value. For example, McCain Thin Crust Frozen Pizza contains 580 mg of sodium or 24% of your Daily Value of sodium in only 1/5 of the pizza – and who eats only 1/5 of a pizza? But you still can enjoy laying into a crisp pizza crust with luscious toppings. Look for pizza shops, such as Mama’s and Pizzaiolo, that feature low sodium or Heart & Stoke Heart Healthy veggie pizzas. Or, make the pizza yourself. 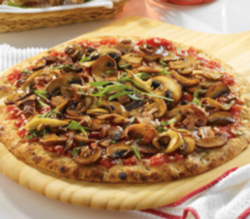 This Balsamic Mushroom Pizza recipe in the PC Blue Menu website, uses a Blue Menu Thin Pizza crust, canned tomatoes (use “no salt added”), mushrooms, balsamic vinegar and olive oil. Top it with a slice or two of Emmenthal Swiss cheese from Costco (2% of your sodium D.V. per slice), black pepper and chopped tarragon or thyme. A quarter pizza slice would deliver fewer than 400 mg of sodium – about 25% of the Daily Value of a salt-restricted diet.

Note that this recipe is a trade-off. There’s still lots of sodium in the crust. But you can leave out the extra 1/4 teaspoon of salt in the recipe, enjoy half the pizza and you’d still leave about half of your D.V. of sodium to consume the rest of the day.To be stricter with your sodiumt intake, try making the pizza on a slice of Rudolph’s Reduced Sodium Reduced Bavarian Multigrain Bread (6% of you D.V. of sodium).

I’ve told you about low sodium foods that are mostly from Loblaw’s, simply because that’s where I’ve shopped for most of them. I’m sure other supermarket chains have low sodium foods in their store brands and, possibly, some low sodium national brands that Loblaw’s doesn’t carry. Shop around. Store brands may contain a little more or less sodium than equivalent national brands. Check the entire Nutrition Facts label.

Don’t overlook plain fresh or frozen fish, for example. An individual serving naturally may contain a little more sodium than you’d like, but makes up for it in its nutritional value. Just stay away from breading and sauces and accompany the fish with plain veggies. Even breading your fish at home, you have to be careful about adding salt or getting unseen salt in the bread or nut crumbs you use. This website gives you a complete rundown of the salt content of different seafoods, served different ways:

10: Check out these sources of reliable information on low sodium foods

A list of low sodium foods plus ideas for flavoring food, without adding salt.

Note that the Canadian Stroke Network’s recommended daily sodium intake for people over 70 is lower, at 1200 mg, than my hospital dietician’s, which was 1500 mg.

The best news of all

Once you learn to shop efficiently for low sodium foods or useful alternatives, add various herbs and spices to your meals and make some trade-offs during each day, you may discover that your food tastes better than ever. You’ll be closer to the true taste of the foods you like. Salt masks the true flavour of many foods. Yes, you’ll miss it at first, but just try a jar of natural peanut butter and then try your old brand. You’ll be shocked by how salty it tastes, and how little peanut flavour comes through.

If you have friends or relatives who follow a low sodium diet or have to shop for someone who does, why not share these tips. Just use any of the social media links below.

Here’s the secret tip: This is for the really self-disciplined. Kettle Brand Low Sodium Potato Chips contain only 1% of your D.V. of sodium in 18-20 chips.