Eldercare » Eldercare Home Health News » Board games, trivia and word games for seniors bring families together
Monopoly was born before I was - and I’m almost 80. A German invented Chinese Checkers in 1892. The first of over 100 million Scrabble (R) brand crossword games was sold back in 1949. More recent games include the exciting balancing game Suspend. 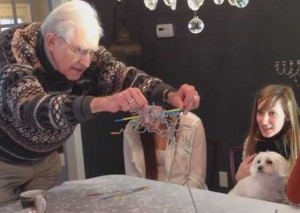 Suspend, a fun game for the whole family

I never admit to being a fan of board games. Until I play one.

I’m always the last guy in. I’m also the person in the gathering who has the most fun with the game. I fool around with the rules. I stay within them, but I make my answers silly when I can. I get competitive as hell. And I always have more fun than I ever expect.

Sometimes the fun is in settling into a long, lazy afternoon of dice rolling, conversation and fun board-game play. Other times, like when the “kids” and grandkids are over for dinner, and dinner’s in the oven, we’re looking for some fun that can be wrapped up in half an hour or less. Happily, there are plenty of both kinds of game.

Six smart phones around a table don’t compare with one big board game.

Even when competing players share an electronic game, each player is head-down, totally absorbed in their screen. Not for nothing is there a new medical problem called “text neck.” That doesn’t happen with a board game. 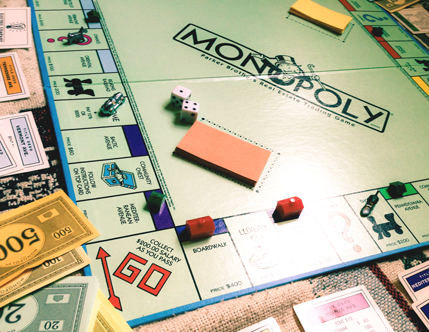 Monopoly a classic, fun board game[/caption]

Who hasn’t tried to accumulate all the houses and hotels on the board that they could?

I had a nephew who had lost everything – all his Monopoly money – and borrowed from me so he could build houses and hotels on the last of his mortgaged properties so he could collect more rent every time I landed on one of them.

He wasn’t alone. Players all over the world have “built” more than six billion little green houses and 2.25 billion red hotels since 1935, according to the game’s publisher, Hasbro.

Get your paws on some Monopoly money, feel the lust for more and you’ll understand why this classic, fun board game just keeps on selling.

Chinese Checkers – nothing Chinese about it

In 1892, a German invented this adaptation of an American strategy game. Its American publishers named it “Chinese Checkers” in a clever 1928 marketing ploy.

In Chinese Checkers, up to six players can try to outsmart each other and be first to get their pieces from their start point to “home” on the opposite side of the star on the board. You advance in single steps or hops over competitors’ pieces – or a combination of both. You also can play a fast-paced or a “capture” version. Wikipedia tells you the details.

You’re in luck if your vocabulary includes 120,000 words. According to the rules of the Scrabble brand crossword game, that’s how many words qualify for scoring.

It was trademarked in 1948 and since has sold one to two million sets a year. In the U.S. alone, over a half a million kids play the game at school. There are more than 200 Scrabble clubs in the U.S. and Canada.

A game of Scrabble is a great way for a grandparent to pass along word skills – and an equal opportunity for grandkids to introduce Scrabble’s updated word list to their elders.

Yeah, you can play Scrabble online. But how do you replace the click and feel of the letter tiles?

Miss time with the rest of your family?
Call Now!

A couple of Montrealers lost some Scrabble parts, so they invented Trivial Pursuits

Winning the classic version of this game depends on how much trivia you know about six different categories – geography, history, science, entertainment and literature. Games Magazine named Trivial Pursuits one of a mere 25 games in the “Games Hall of Fame” in 1993.

Interested in testing your general knowledge? Then try the Genus, Genus I or Genus II edition. There are also a Junior edition, an All-star Sports version and several others on specific themes. Trivial Pursuits is one the most wonderful “It’s-grim-rainy-and-cold-out-what-do-you-want-to-this-afternoon?” ways to fill two or three hours.

Who knew? Canadians also invented Balderdash – a word and trivia fun board game 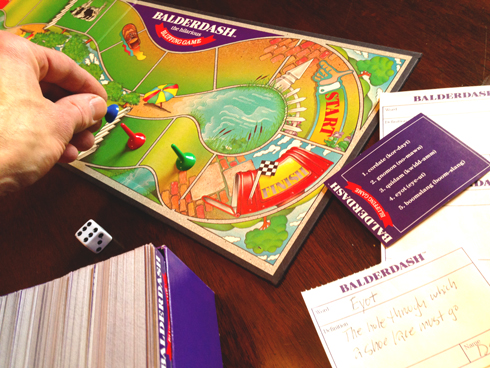 Balderdash will get everyone laughing every time.

You can be sly. You can be funny. You can show off your word power. You can use every mind-bending strategy you can think of to throw your competitors off course in this thought- and fun-provoking, but surprisingly easy to learn, game.

A player called the “dasher” provides a word the other players have to define. They can write down the real definition, make one up that seems close or get plain silly (that’s me, folks) and create one that is really nuts but just might be real. The hardest part when playing Balderdash is keeping a straight face as players try to guess the real definition of the word.

Balderdash is challenging, even educational – but above, all it can be hilarious.

How about a game that forces a point count every three minutes – Boggle anyone? 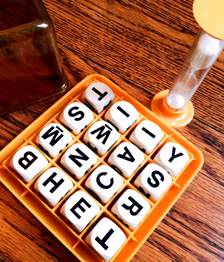 This word game is much faster to play than Scrabble. Boggle is really simple. Shake up 16 dice with letters on them and settle them in a tray. Find all the words that the exposed letters on adjacent dice make up and write them down. Count who has found the most and longest words by the time the three-minute timer runs out. The player with the most points at the end of the game wins. There’s a little more to it, but not much. Boggle makes a terrific after-dinner game.

My wife has played it.. The company that makes it says you can learn it in less than a minute, yet it has enough challenge to keep players of all ages involved. Here’s how it works:

Blokus makes a refreshing change of pace from word games.

All you need for this fun game is pencil and paper

My wife invented this game to keep our kids occupied while waiting for their paediatrician to see them.

All you need is a pencil, plenty of blank paper and a firm surface for drawing.

Just draw a squiggle. Then ask your “player” to finish the picture. There are no rules other than turning on the player’s imagination. And nobody wins. Well, everybody wins, because it’s amazing what people can “see” when they’re allowed to be free. You can in turn add to the other player’s drawing. Or just ask them to provide you with a new squiggle.

There’s no top or bottom, no left or right, no right or wrong. There’s just imagination. And fun!

So the next time the family’s over, pull out a board game (and maybe some healthy snacks) and have fun!